Bringing home a new family pet is a fun experience for everyone. Whether you’re taking home a cat, a dog, or even a hamster – the excitement of having a new companion to share the house with is probably on the forefront of every family member’s mind. For another pet, though, the idea of having to share their established territory with a new friend might be a challenge. Most dogs are friendly and accepting of other animals to share the space with, however some might be a bit apprehensive and unwilling to accept the new pet. If you already own a dog, and are planning on bringing home a new pet, here are some tips to introducing them to their new buddy. 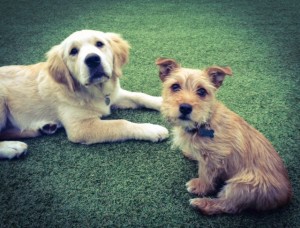 If you’re bringing home a second dog, it’s important to introduce them in circumstances that leave the least possible risk of fights and squabbles over toys, territory, food, and so on. While it might seem like a bright idea to bring your first dog along to pick up the second dog, thus avoiding surprise when you get home, this will just open up endless capabilities of chaos. Two dogs who have never met before, in a car? No thanks. Leave your first dog at home, and when you bring the other dog home, don’t force interaction with them. The dogs might at first ignore each other – that’s fine. They will most likely feel uncomfortable at first, and will interact in their own time. When they do, encourage them in a positive tone, and make careful observation of both dogs’ body language so that you can avoid the interaction escalating. Slowly, the dogs will become used to each other, and soon enough you will have two pooch pals!

Introducing your dog to a new cat might prove to be a bit more difficult. Do so when your dog is calm and relaxed. Keep him or her on their leash, and keep your cat in a carry cage so they feel less vulnerable and probably more comfortable with the interaction. Chances are the cat will hiss and show aggression at first – maybe prompting some from your dog, but this will settle down after a while. When a successful interaction is held, award both pets with treats and attention. Even after you feel like the pets might be ready to interact on their own, make sure you keep an eye on them, so that no serious fights break out. Your pets should at least learn to tolerate each other, and if done right, you could very well end up with an unusual pair of companions!

Dogs are very friendly animals, and can get along with almost anything, but when introducing a new pet to them, it’s a good idea to follow the advice above – just in case, and so that you end up with the best possible relationship between the two pets!