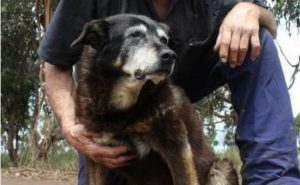 But what about those dogs that surprise everyone and live to remarkably old ages? Just like there are some rare humans that are still here well into their hundreds, so too have there been incredible dogs that attain almost unbelievable ages…

There are numerous cases of dogs that have been authenticated by Guinness World Records as living well into their twenties, which is remarkable as it is so rare. These dogs include large and small breeds, pure-bred dogs and mutts, and to be the “world’s oldest living dog”, they simply need to be the oldest dog alive right now. For this reason, ages of these dogs range between nineteen years and thirty years.

There was actually a study performed to assess the longevity of the Australian Cattle Dog, as these dogs seem to have remarkable longevity over any other breed. One hundred of the dogs were studies, demonstrating an average lifespan of thirteen and a half years. While there are some impressive specimens, and these dogs tend to be healthier and live longer than other breeds of the same size and weight, extremely old dogs are the exceptions, not the rule.

Keep your dog healthier and happier for longer with regular dog walking, proper grooming, healthy diet, and lots of love and affection. Every minute they are with us is precious!