Queen Elizabeth II is now the longest reigning monarch to ever hold the British throne. Whether royalist or republican, it can’t be denied that this is an exceptional milestone and that to this day, the Queen is a remarkable woman, particularly to be still serving her nation so actively at such an advanced age.

Corgis go with the Queen like butter goes with bread. She has owned more than thirty Pembroke Welsh Corgis throughout her reign. She has also owned cocker spaniels and dorgis (daschund/corgi crossbreed). 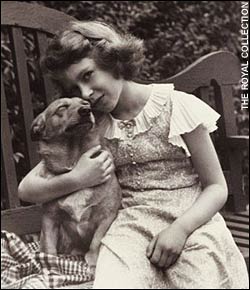 Corgis have been Welsh working dogs for many hundreds of years, herding cattle and sheep by nipping at their hooves.

The then Princess Elizabeth was given a corgi named Susan as an eighteenth birthday gift from her father in 1944. The Princess and the pup were inseparable. This dog even went on honeymoon with her mistress in 1947. All corgis the queen has bred since are descended from Susan. Corgis were also mated with Princess Margaret’s Daschund Pipkin, and the Dorgi breed was born. 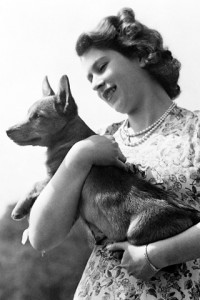 The Princess became a mother in 1948 and Susan followed herself in 1949. Her first pups were Sugar (belonging to the young Prince Charles) and Honey (who was to live with the Queen Mother). 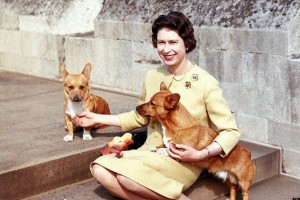 Since the 1950’s, the Queen has personally overseen a corgi breeding program on the grounds of Windsor Castle. Purebred puppies from her kennel are registered as “Windsor”. She has never sold a single dog, instead keeping or giving them as gifts, and she has never allowed her own corgis to be competed at dog shows. She has personally owned as many as thirteen dogs at a time. 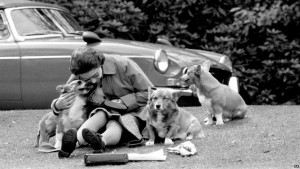 It was reported this week that the Queen’s corgi breeding program has come to an end – perhaps because the Queen does not wish to leave behind any dogs when her own life comes to an end. She is also extremely distraught whenever one of her beloved dogs dies.

Susan died at Sandringham in 1959. She is buried in the pet cemetery there that was created by Queen Victoria. 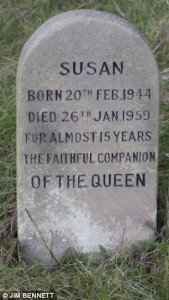 The Queen remains the only Corgi breeder in the world whose current corgi bloodlines are bred from her foundation bitch. It is remarkable in breeding circles to have maintained the direct pedigree for such a long time – at least fourteen generations. 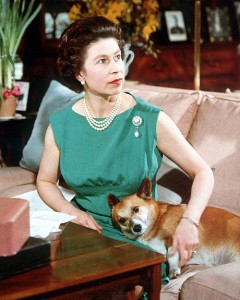 Today, Her Majesty has two corgis, Willow and Holly, and two Dorgis, Vulcan and Candy. They travel with the Queen between residences and she personally cares for them. They give her unconditional love and affection, and she reciprocates, taking them for daily walks, feeding them herself, and considering them as members of her family. She shares with them an iconic bond, for which she will be remembered forever.