Pets are, by nature, curious, and dogs are more so than many other species of animal. There are many household and garden substances that are toxic to pets and can cause poisoning. 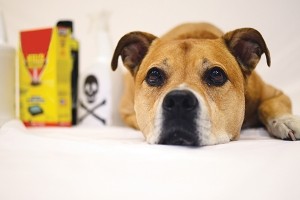 Poisoning results when any toxic substance is ingested, inhaled, absorbed, injected, or applied to the skin. The toxin causes damage to the body’s structure, or disturbs its function. Some examples of toxins include certain plants, certain foods, garden chemicals, cleaning products, rodent or insect poisons, or medication given inappropriately or in excess. Any chemical or product that will harm a human will most certainly be harmful to a dog.

Signs and symptoms of poisoning in a pet vary depending on the toxin and include:

• Gastrointestinal symptoms including vomiting and appetite loss arise from eating toxins like lead paint, garbage, and toxic plants such as holly and ivy. Diarrhoea will occur after eating plants such as iris, poinsettia, and daphne; chocolate, medications, garbage, and some snakebites.

• Bleeding issues such as blood in the faeces, anaemia, nosebleeds and bruising will occur following ingestion of rat poison, as well as eating excessive amounts of onions and garlic.

• Cardiac symptoms are caused by medications as well as plants including oleander and milkweed.

• Kidney failure and the inability to urinate will occur after poisoning by antifreeze and an array of plants.

• Liver failure is a result of toxicity from an array of plants as well as medications such as paracetamol.

• Seizures and other neurological symptoms will occur due to a wide range of toxins. These include aspirin, tobacco, alcohol, antidepressants, flea repellents, insecticides, detergents, and drain cleaners, as well as some frogs, snakes, spiders and plants.

The type of toxin and its volume will determine how quickly your pet will display symptoms.

You should take your pet to the vet or animal emergency hospital as soon as you suspect or know poisoning has occurred.

If poisoning is via oral ingestion, you know what the toxin is, and occurred within the last three hours, vomiting may be induced with hydrogen peroxide UNLESS:

If the pet vomits, take a small sample of it to the vet – this may help in identifying the toxin for the best treatment course.

With the exception of hydrogen peroxide to induce vomiting, never give any other liquid – it may hurry the course of the poison into the body.

Emergency first aid should never take the place of professional veterinary care; it is merely a time-sensitive measure that can save a pet’s life between incident and arriving at the vet.