We have already taken a quite in-depth look at plants in the garden which are not safe for dogs, and also at those which are. Safety in the back yard or garden doesn’t just stop with vegetation, however, and there are a number of other things that can represent various levels of risk to your pooch… 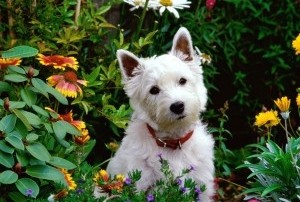 Fertilizers might be great food for plants, but they can be incredibly toxic if a curious dog eats them, at the very least resulting in a significant stomach upset.  Pets can be exposed weeks after application to the garden. Read instructions carefully, try to choose less toxic products, and keep Fido away for the recommended period.

Cocoa mulch is a by-product of chocolate production and is commonly used in landscaping. It smells sweet and appealing to dogs. It is just as poisonous to dogs as chocolate is. Kit can cause vomiting, hyperactivity, diarrhoea, pancreatitis and even seizures. A better alternative for landscaping would be something like cedar bark or shredded pine.

Left lying around, these can cause injury to curious or active dogs. Rakes, shovels, spades and the like can easily injure noses and paws; rusty nails can puncture flesh and even cause tetanus. Dogs, like humans, are susceptible to tetanus. Store tools in a safe area away from canine access.

Sprays, baits, and granules used to kill insects, rodents, and snails can be catastrophic if consumed by a dog, particularly snail baits and rat poisons. Store and use them very carefully and make sure your pet can never access them.

Another thing that is great for the garden but not so good for your dog. Any foods that are toxic to your pet should not be placed in the compost heap, including coffee grounds, mouldy foods, and certain pet-unsafe fruit and vegetable peels. Never put meat or dairy into compost.

Keep lawns mowed and edges trimmed to remove habitats that fleas and ticks love so much. These critters live in tall grass and brush. Fleas will result in scratching, scabs, hair loss, hot spots and tapeworms – and Fido can bring them inside and share them with you. Ticks can kill a dog as well as cause a range of diseases. Spiders are also dangerous and bites can be catastrophic.

Even living in suburban and metropolitan areas is no guarantee that you won’t have a slithery visitor to your garden. If you keep lawns trimmed, and avoid wood piles and rubbish piles (hiding places), they will usually quietly move on. Food sources such as lizards, skinks, mice and rats will be a smorgasbord too appealing to leave behind for a snake. And dogs are very curious, so will likely not leave a reptile alone. Take steps to avoid making your yard an appealing home to snakes, and if you do see a snake, keep Fido inside until it has moved on or been safely relocated. Never try to kill a snake – call in a professional snake catcher to solve your problem.