There is a widespread belief that a dog’s mouth is clean – cleaner than a human’s – and some people even believe that a dog’s saliva has antibacterial properties. Then there is the converse idea that a cat’s mouth is toxic and should be avoided at all costs. When you consider what dogs might eat, where cats lick, etc, the mind boggles and it’s almost a wonder we want to have these licky creatures in our company at all! So what is the truth? 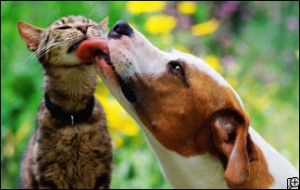 According to historical accounts, Julius Caesar subscribed to the belief that dog’s mouths had antiseptic properties, and he actually employed a number of trained dogs whose sole purpose in the Roman army was to lick the wounds of injured soldiers.

Sadly, the myth that a dog’s mouth is cleaner than a human’s is just that – a myth. It’s true that humans and dogs do have some differing oral bacteria, but their mouths are teeming with microbes just as much – if not more so – than ours are.

The danger to a human from the bacteria in a dog’s mouth (usually only if bitten by said dog) depends on the  depth of the wound, if it’s a puncture wound or an open wound, and exactly what type of bacteria the dog transmits to the human.

Pet bites do need to be taken seriously – especially cat bites. This is not due to the actual type or amount of bacteria they carry (though some cats can be carriers of toxoplasmosis) but is instead due to the nature of a cat’s bite. A puncture wound is created and this allows bacteria to become trapped under the skin. Infection and even abscess can result. This is why cats who fight often wind up at the vet with nasty infections that require draining.

So why do we believe that dogs have cleaner mouths than humans, and that cats are evil incarnate when it comes to toxic mouths? It may be due to the fact that human-to-human bites have much higher rates of infection than do dog or cat bites to humans.

There is no need to panic about a loving pet kiss on unbroken skin. We can assure you that your dog’s and cat’s mouths are pretty much guaranteed to be cleaner than:

So don’t worry too much about getting licked, even on the face – or if Fido or Puss take a sneaky taste from your dinner plate. Chances are you’ve been exposed to much worse with no ill effect. Here at Urban Paws dog day care, we welcome doggie kisses!