As mentioned last week, by the time of the ancient Greeks, Romans and Egyptians, companion dog ownership had become very common (so had that of cats – cats as companions will be addressed next time). Dogs were certainly used as working animals, but they also provided a cultural service in some regions.

Some ancient civilizations believed that the human soul had to pass through a dog to reach the afterlife – deceased humans in these civilizations were actually fed to dogs quite promptly. These practices evolved over time into a belief that dogs could prevent the death of their human owners. 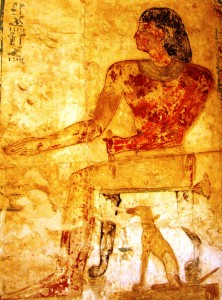 Egyptian pharaohs kept dogs as companions. Chinese emperors kept dogs; these were even often suckled as puppies by human wet nurses, and as adult dogs had their own servants.

Emperor Ling loved his dogs so much he ranked them as senior court officials; they had the finest food, slept on the best rugs, and had their own bodyguards.

Ancient Greeks kept dogs in their temples as healing co-therapists; it was believed that their presence could cure an array of ills and ailments. Nobility in Greece and Rome were enthusiastic pet owners.

Dogs were very commonly kept by nobles and the clergy in Mediaeval Europe. Women tended to prefer lap dogs, whereas men usually chose hunting hounds and falcons. Only nobles were allowed to have very large dogs, and breeds such as greyhounds, wolfhounds and mastiffs were a sign of high status. Henry VIII himself owned hunting greyhounds, beagles, and spaniels.

Mary Queen of Scots had an entourage of lap dogs which she dressed in blue velvet suits. When she was beheaded in 1587, a tiny dog was found (by the executioner) to be cowering beneath her skirts as she lost her head. 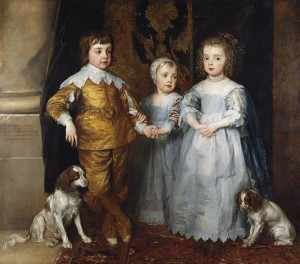 Not everyone, however, was in favour of the domesticated companion dog. The Catholic Church in Europe decreed that human associations with animals too closely resembled pagan practices, and also suggested that food for pets should instead be given to the poor. Close human association with pets was used as a sign of heresy during the Inquisition. An animal companion was deemed to be a “familiar”, and was considered to be symbolic of Satan. When English Queen Anne Boleyn was tried for treason and witchcraft in 1536, her pet dogs were described as being “familiars” in order to support the trumped up charge of bewitchery.

Pet ownership was widely accepted in Europe by the late 1600’s, and by the late 1700’s it was common amongst the middle classes as well. 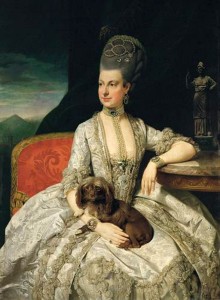 Dog ownership as we know it today was born in Victorian times, and the first formal competitive dog show was held in 1859. This was for the demonstration of Setter and Pointer Breeds. The first commercial dog food was sold in England in 1860, made by the Spratt’s company. 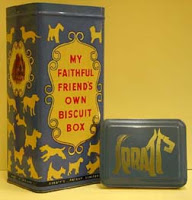 Queen Victoria was a passionate dog lover, and her daughter in law Queen Alexandra was renowned for her love of all animals, furry and feathered. 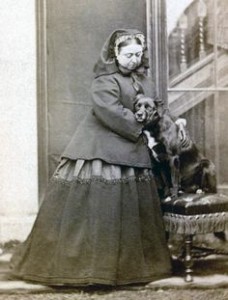 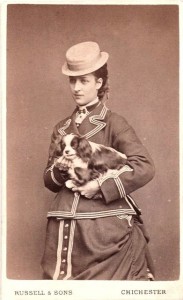 Even Queen Elizabeth II is known for her love of corgis and dorgis (Daschund x corgi); she was gifted a Pembroke corgi named “Susan” on her eighteenth birthday by her father King George VI. All her corgis and dorgis since are descended from this dog. 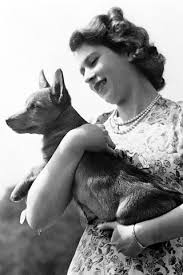 Dogs are not the only animals which have been domesticated for human companionship – cats, horses, ferrets and many more species are popular simply for the love they give and receive.
Next time we will look at the domestication of cats…